Get our eBook through Amazon Smile, and a donation goes back to the foundation.

Jordan’s Journey: A Letter From A Father 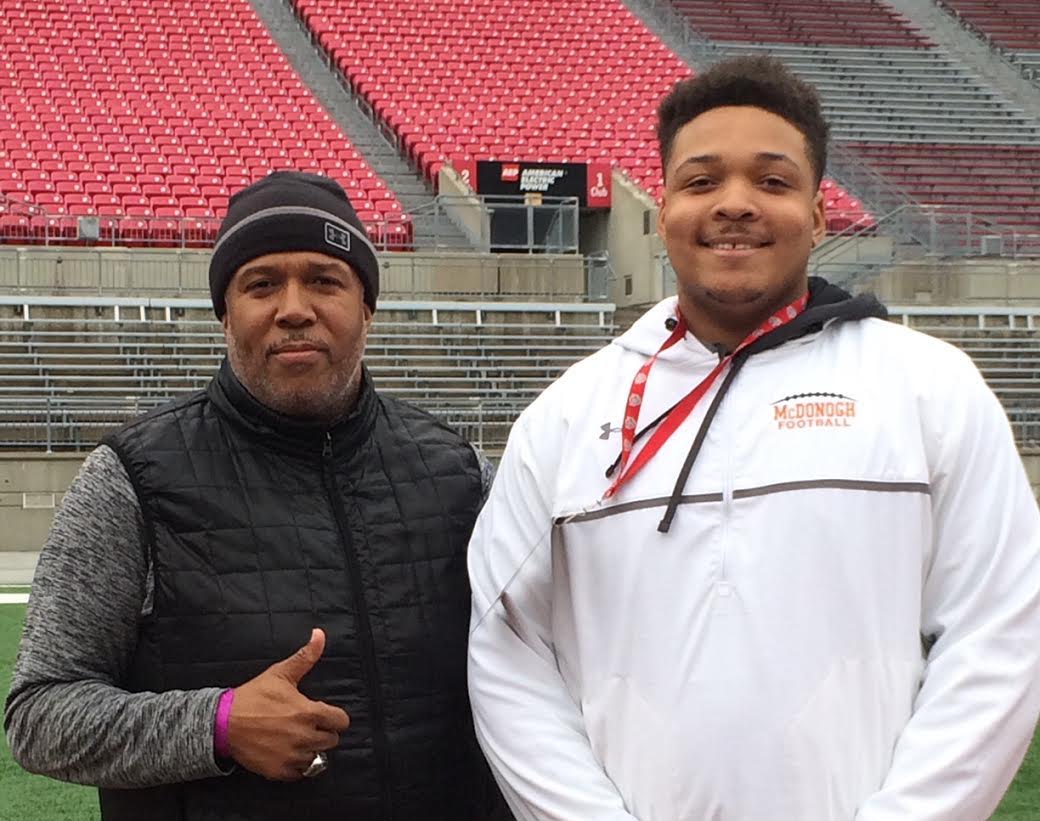 Jordan Martin McNair was my son. He was flesh of my flesh, and bone of my bone. He was good. I don’t say this just because I am Jordan’s father; I say this because it took an entire village to raise the son I, and his mother Tonya, had the privilege of raising.

Jordan was a true athlete from the moment he first walked onto the tee ball and flag football fields and the basketball gym floor. Jordan was always a competitive athlete from winter basketball leagues to the Baltimore Neighborhood Basketball League (B.N.B.L.) and Amateur Athletic Union (AAU) leagues. Always the biggest kid on his teams, he found a place where we thought a big man could be a big man: on the gridiron.

Up until the age of 13, Jordan and I were focused on taking his basketball skills to the collegiate level. We just knew he would get there! Football was never a thought. It wasn’t until a coach from another school suggested that Jordan consider playing football instead of basketball. Jordan had one thing going for him that you just couldn’t teach, his size! Along with a strong work ethic and supportive mother and father, Jordan was a coaches’ dream. While our college basketball dreams slowly faded away, we knew we had the making of a football career ahead of us.

At age 14, Jordan walked onto the football field as a basketball player with quick feet. His size, foot handle and focus made him an excellent choice for an offensive lineman. He dominated on field as a left tackle guarding his quarterback. Although Jordan had yet to develop the skills and learn the fundamentals of football, his athletic ability made him a viable opponent. The rest would come with time, practice, and great coaches.

Jordan’s first season on the football field, positioned him in front of several private schools, giving him opportunities to become a rising student athlete. He was eventually recruited by the McDonogh School, where a serendipitous relationship was formed between us and the school. McDonogh was family. There he continued to rise and solidify his status as a highly sought after offensive lineman. During his freshman year, he was already on the radar of the University of Maryland, a rarity for their athletic program, and Ohio State. Jordan received more interest than typical of 9th grade athletes. It was at that moment a seed was planted for collegiate athletics.

Somewhere between video games, summer school, basketball games, and football combines, Jordan began to get to know his body. Or should I say, he began to grow into his body. Alas, everything was falling into place! Even with a full schedule, Jordan still made time to enjoy his high school years and spend time with friends. He was a hugely popular student known more by his smile than words and loved by his teachers and peers.

As the college offers started to roll in during his sophomore year, Tonya and I kept him grounded. Football was important, but so was his schoolwork and his household responsibilities. He’d hear from us often, “We don’t care how many offers you receive from these colleges, you need to work harder in math…now go take the trash out!” It was all love and laughter…and that smile.

I’ll never forget, and I don’t think Tonya will either, the second day of school of his junior year. Jordan came home to at least 200 pieces of mail from various colleges. For any student athlete, this is a momentous time in their high school athletic career – to have that many college athletic programs courting you, expressing interest in not just your athletic abilities, but your academic abilities, too!

As a father, there was always a sense of pride every time Jordan would text me with new offers. At this point, they were rolling in from Ohio State, Rutgers, Duke, Clemson, Alabama, UMD, Penn State, UNC, Auburn, and many more Division 1 football programs. I was a proud father.

Many college visits, summer combines and skill camps later, Jordan was a senior who had already made it to a few proms, and needed to make a very important decision: where to next? Jordan had to choose a school where his academic and athletic dreams and aspirations would prepare him for life, whether that was in the NFL or as a physical therapist. We chose University of Maryland as a family.

Our plans did not include his death. Our plans included something more. Our plans included him. But God had other plans. Jordan gave us 19 great years, and we will miss him. He was a great son, grandson, cousin, nephew, brother, friend, student, roommate and teammate.

In 19 years there were many life lessons, many fatherly conversations, and many teachings. But one that I believe stands out the most is that I taught Jordan to be a visionary – to see the value in building a legacy instead of joining one.

While Jordan is not with us to build his legacy, as a family we are doing it for him. This is his legacy. We ask but one thing, that you join us in keeping Jordan’s name and legacy alive by supporting The Jordan McNair Foundation (T.J.M.F.).

21 Replies to "Jordan’s Journey: A Letter From A Father"